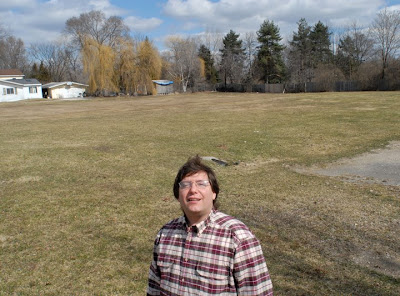 John Dolza was laid off from his job at a nursing home last summer. After spending a few months volunteering for the Obama campaign, Dolza decided to focus his efforts on establishing the first community garden in his town of Fenton, Michigan.

In a few short months he has rallied the town around the project, securing support from the city government, several local businesses, a grant from the Mott Foundation, and numerous friends and neighbors.

"I could not do this right now if I didn't have all this support. MARVIN payments are keeping me in gas and food, my good friend Val is putting me up...and the city is really, really supportive".

For the time being, Dolza has put off job-hunting to focus on organizing the garden full-time. With a nod to his umemployment benefits, he jokingly refers to it as "the Garden that MARVIN built".

The picture above, taken in March, shows Dolza at the site before groundbreaking. This is what it looks like now: 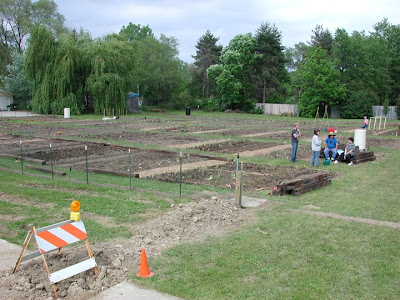 Dolza believes this is a project of necessity.

"People around here are hungry," says Dolza. "We've got folks who are going to Wal-Mart and stealing food and toilet paper because they're so broke".
With this in mind, 2600 square feet of garden, about a quarter of the entire space, is dedicated for food for the hungry.

Dolza was also pleased to discover the project appealed to a wide range of Fenton residents.
"We've got retired hippies, U.A.W. guys, former GM managers, family moms that wanna grow food for the family...a huge diversity of people and all of them really energized".

Nevertheless he says, "There's a lot of cohesion here. Folks here wanna take care of their own, and that's what we're leveraging".

Dolza believes the time for a community garden of this nature is particularly ripe.

"Personally I think it's prudence, in case really hard times are around the corner... Also- we've all got time instead of money. If you're poor and don't want to live on double cheeseburgers, corn flakes and ramen noodles, this is about as good as it gets".
Posted by Andy Cook at 1:12 PM