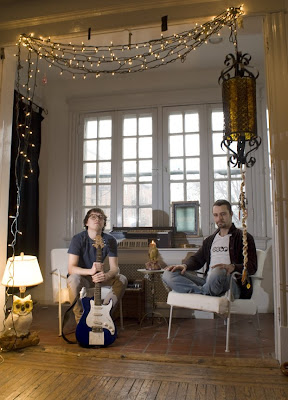 Caleb and Kyle live together in an apartment in Charles Village, Baltimore. Both lost their jobs this year and have found themselves going a little stir crazy. Kyle admits to having taken walks to the ATM even when he didn't need cash, just to get out of the house. But neither of them have been idle. Caleb has taken the opportunity to get his home recording studio in working order, and has been recording music daily for his band Lands and Peoples. Meanwhile, Kyle spent his tax return on printing supplies and has taught himself how to silkscreen. He is pictured wearing one of the t-shirts he's begun producing and hopes to eventually turn into a line of clothing.
Posted by Andy Cook at 2:51 PM