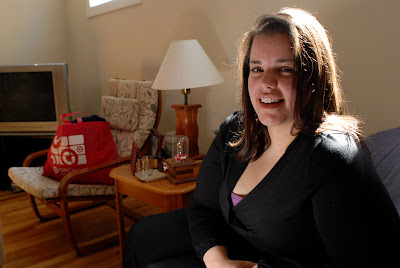 Was a Marketing Analyst for Circuit City until the company filed for bankruptcy protection last November. They went bankrupt in January.

Sarkees had only been with the electronics retailer for four months when she was laid off. She quickly found a position at a Lane Bryant retail store in Richmond, VA but lost her job there as well when it closed in January. Only a week later, she found yet another position at a company called Mortgage Outreach Services. According to its' website, MOS "is a company dedicated to helping borrowers experiencing difficulties with their mortgage. MOS will act as a liaison between you and your mortgage company in finding a possible solution to your problem".

Sarkees says she has to share a desk at her new job because the company is hiring so fast that it has grown too big for its' office space. "This company just happens to be doing so well because the economy is so bad," says Sarkees. "Normally they would be basically a collection agency. If you defaulted on your mortgage they'd be calling you. But now because the tables have turned, they're in the position to help people try to save their houses... It actually feels good because you're making some sort of difference".

She says that many of MOS's customers now are homeowners who are up to date with their mortgage payments, but know that they'll be falling behind in a few months, often due to a job loss. The help they are seeking is preventative.

Sarkees is incredibly grateful to have found work in this economy, but she does have a lingering worry in the back of her mind. "I'm wondering if the lifespan of my job will only be two years. At this point, it's preventing me from buying a house just in case I don't have a job when the economy recovers".
Posted by Andy Cook at 6:57 AM