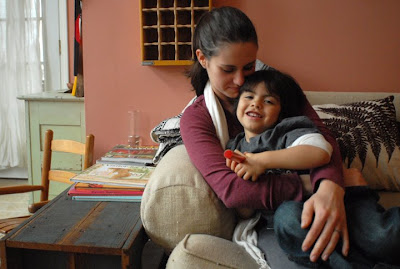 Chanda Williams was an office manager and event coordinator at an Atlanta restaurant. In October, after struggling through a slow-down in business, the restaurant was bought by a larger company and her position was eliminated. She has been out of work since.

Williams lives in East Atlanta with her husband, a maintenance worker at Emory University, and their 3 year old son Che. Their home is cozy and scattered with toys, and looks out over a partially wooded backyard that this morning is blanketed in snow. The house is owned by Chanda's mother, a fact Chanda considers a blessing that allows them to continue to stay afloat.

"I have a bachelor's degree and I can't even get secretarial work," says Chanda. "My fall-back has always been waiting tables, but I have a friend who is a manager at a restaurant, and he told me they put an ad on Craigslist for servers. They got 200 responses in the first day and half of [the applicants] had masters degrees".

Since Chanda is home most of the time now and they've lost her income, the Williams have taken Che out of daycare. Coincidentally, two of her friends with children also lost their jobs recently, and the three have teamed up to create their own daycare network.

"It forced us to build a community," says Chanda.

The three mothers each take turns watching the kids, giving the other two time to job hunt and run errands. The solution was a welcome change for Chanda after a period of being home with her son seven days a week.

"I didn't realize that working part-time was keeping me sane, because it was a break and it was making me a better mother. If I have the day away from him, then the time we have together is so much better".
Posted by Andy Cook at 10:20 AM