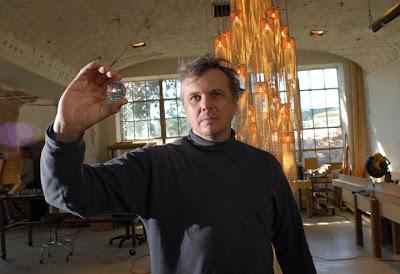 Christopher Moulder runs his own industrial design studio in Atlanta, GA. With the help of a small staff, he creates inventive, sculptural lighting solutions that are equal parts form and function.

Projects lay scattered around his cavernous warehouse studio, and two of his assistants buzz away on them with precision power tools. Classical music blasts over the stereo and nearly drowns them out.

The studio is busy. Moulder says business is going great, and he has a theory as to why: many of his competitors have recently failed. He cites a handful of other local design firms in town that have closed in the past few years, including one that used to be run by one of his employees.

"In the last three or four months, I've been getting inquiries and orders... it's enough that I have to start re-assembling my team".

His team needed re-assembling after the abrupt cancellation of a big job for condo developer WCI Communities in the fall of 2007. The real estate developer had hired Moulder to design lighting for a large hotel in Miami, but backed out mid-way through. It soon became known the company was in trouble financially, and they eventually filed for bankruptcy the following year.

The WCI project was so big it had consumed all of the activities of Moulder's company. When it ended, they had no other jobs in progress. He considers himself lucky it ended when it did, because it forced him to scale back his operation months before the economic crisis really struck.

"If it had ended a year later, business would have been at a dead stop at a bad time. This past year I've been relaying the groundwork just enough to where [the current jobs] can tide me over".

Moulder is pictured holding a crystal left over from the ill-fated WCI project.